Today we are talking about “Gilda” armchair produced by Zanotta.

We can define it a 20th century design classic, through which Zanotta pays homage to a great Italian architecture of the 50s: Carlo Mollino. An “incorrigible bad boy”, as Bruno Zevi defined him, passionate about planes, cars and speed, passions that are easily traceable in the dynamism of his designs and projects. The shape plays a central role in its design process, especially if aerodynamic and ergonomic.

Zanotta has contributed significantly to the rediscovery of the works of Carlo Mollino, thanks to the attentive gaze of the founder Aurelio. Starting in 1982, various pieces designed between the 1940s and 1950s were put into production, most still in the catalog, including the Gilda armchair.
In addition to the typical style of the designer, the Gilda Armchair bears witness to Mollino’s attention to research, innovation in technique and materials and above all to the craftsmanship aspect. His furniture, in most cases, was not born to be mass-produced but to be made as unique pieces, specially designed for the interiors he designed. Its furnishings are unique sculptural experiments. 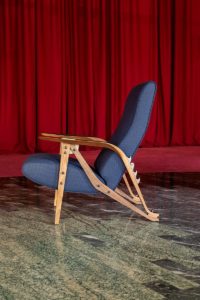 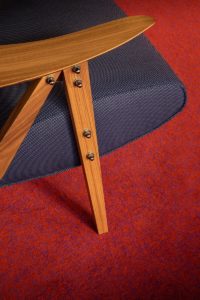 In 1953, grappling with the Pomella house furnishings, Carlo Mollino had designed two twin armchairs with reclining back, characterized by a shaped and sculpted solid wood structure, with two padded elements for the seat and back and with fixing and adjustment systems of brass.
Zanotta’s tribute is a “philological reconstruction” of the original version, it is not in fact a faithful reproduction of the first two armchairs but an evolution that gives further sculptural beauty to this object, amplifying its character. 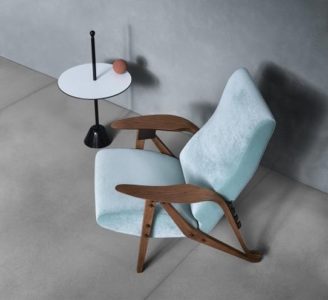 The design of the armchair is defined by solid but welcoming lines and a particular balance in the distribution of the masses, a perfect contrast between the imposing padded parts and the wooden structure instead reduced to the essentials. The arm / rear leg element, is the extremely characteristic component of the whole seat, has an organic leaf shape that widens at the point of support of the elbow, wide enough to support a book or a pair of glasses. It is built in a single piece and no longer jointed as in the original, albeit made by the excellent craftsmen of Mollino.

In the current version of Gilda, with the evolutions made by the company, the back and seat are removable, both in the leather and in the fabric variant, obviating a non-negligible criticality of the original; the armchair was also enhanced by the addition of pigtail that follows the whole profile of the armchair. It is available in natural oak or canaletto walnut for the structural parts, the padded items can be covered in leather and fabric.